Just how lame is the Bush / Cheney presidential ticket? 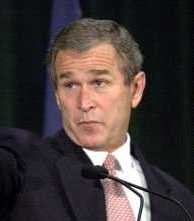 Here's how I would evaluate it:  the nominee George W. Bush and his running mate Dick Cheney are the worst ticket put forward by a major US political party in at least 75 years, possibly the worst of all time.

I'm not alone in this opinion:

"He's probably the least qualified person ever to be nominated by a major party...  What is his accomplishment?  That he's no longer an obnoxious drunk?"
-- Ronald Prescott Reagan on George Walker Bush

Come on, try to name any major Democratic or Republican president, vice president, or candidate for those offices who has any shortcoming or character flaw that Shrub isn't a match for.  Just try.

George W. Bush combines in one person the shortcomings of every presidential politician you can name.  He has the duplicity and the intolerance for dissent of Nixon, the out-of-control personal behavior of Clinton, the isolation from normal life (that is, from people who aren't rich) of Reagan, the callousness and impulsiveness of his father, and a talent for crooked money-making deals that nobody in the white house has equalled since the days of Teapot Dome.  And when it comes to reasoned discourse, Dubya is sounding more and more like a second J. Danforth Quayle.

Against all these shortcomings, what are the positives?  What does he have to offer?

In fact, I'm trying to think of just one thing.

A record of independent accomplishment through his own talents?  Not hardly.

Rigorous dedication to strict conservative ideals?  He sure doesn't want us to think so.

Or, on the other hand, moderate centrism?  Ask Bob Jones.

A plan for a better economy than what Clinton has left us?  Tell me another one...


I can't see a single positive thing the man can offer as a reason why we should trust him with any crucial leadership.  He has nothing to offer.  Nothing!  Even for conservatives, there's nothing there.  As far as I can see, there is one reason, and one reason only, why he has been successful so far as a candidate: money.  Rich friends.  The ability to raise in excess of eighty million dollars to campaign with.  It is this, and this alone, that put him ahead of other Republican candidates, and it is this alone that gives him any chance against an incumbent vice president in a time of prosperity.  (That and the fact that Al Gore's face looks like a shiny old suit.)

Late addition: The stands Dubya took in the debates with Gore finally illustrate what the real definition of "compassionate conservatism" is: someone who wants to spend just as much money on federal programs as a democrat does, but would like to cut the taxes that would pay for it all.

I believe that if George W. Bush is elected, he will be the worst president that present generations have ever seen.  Worse than Nixon, worse than Reagan, worse than Bush Sr., worse than anybody back to at least the time of Herbert Hoover.  I still predict that he will lose the election, despite his being ahead in the polls as I write this, but if he does win, it will lead to a Democrat landslide in 2004.  And the unspoken question that the electorate will be trying to avoid asking itself will be, "What the fuck was I thinking when I voted for Bush?  How could I have been that dumb?"

An elucidation about all the specifics of why we should not vote for George W. Bush is beyond my resources of time and energy for now... except for one point: W. doesn't want the federal debt to be paid down.  So I suggest you peruse the links below.  Learn how the Texas Rangers got their stadium built.  See the biography that the Bushes got the publisher to burn.  Thrill to "the biggest influence-buying scandal in recent memory."  Discover what kind of sloppy-ass courtroom practices lead to executions which Shrub is "confident" have never killed anyone who wasn't guilty.  Enjoy the pandering to fringe right-wing racists.  Marvel at the dismal record of Texas in quality of life measures compared to other states.  Savor the ever-growing collections of Quaylesque quotes.  And search in vain for any action that actually shows any compassion in his "compassionate conservatism".

Bush's Skeleton Closet: www.realchange.org/bushjr.htm
(they have other politicians' skeletons too)

Dubya caught on videotape acting... possibly drunk? Or at least acting like an asshole: www.thesmokinggun.com

The one Bush said "There ought to be limits to freedom" about: www.gwbush.com

More of a Limbaugh Watch but plenty of W.: www.bartcop.com

POSTSCRIPT:  How well did I guess?
In 2003, we can now make some assessment about how well I guessed what kind of president George W. Bush would be.  There were some important things I did not predict, of course: I never thought George W. Bush would start a domino series of wars with multiple foreign regimes, nor did I expect him to start implementing a police state in which the fourth, fifth, and sixth amendments no longer protect us.  Nor could I ever have guessed that he could gain an 80% popularity rating, at times, by doing so.  All of these things, of course, are results of September 11, which nobody could have anticipated.  I also did not expect the bulk of the national news media to dive wholeheartedly into uncritical one-sided cooperation with White House desires.  September 11 can't be given the entire blame for that.

My prediction that he would lose the election was not entirely inaccurate... yet he's president anyway.  My prediction that this would lead to a Democratic landslide in 2004 now looks very iffy, particularly if he starts a war with Syria around that time, which he now seems to be warming us up for.  If voters judged by domestic issues alone, of course, he wouldn't have a chance -- the economy has fared far worse than anticipated, and he has done nothing about this except to intensify the same tax cut agenda he proposed in times of prosperity.  His only concession to hard times has been to increase corporate welfare.  But wars have a considerable ability to shore up re-election.  It's anybody's guess how things will look a year and a half from now.

My prediction of a White House tainted by "crooked money-making deals" has been amply borne out by the President's and Vice-President's friendship and cooperation with Enron and its ilk, actively aiding them in the ripoff of billions of dollars from Califoria's electric utility customers and still today hampering the state's efforts to recover any of the stolen money.  And I have elsewhere documented numerous instances of lesser favoritism and corruption along with this large example.

In short, Bush has been no more competent or trustworthy than I expected, and far more authoritarian than I anticipated.  Overall, Bush's term of office has been a disaster for America on many fronts, and in foreign affairs the consequences may still do us further injury years after he is out of office, since at least two unfriendly regimes, probably more, are now reacting to his belligerence by rushing to assemble nuclear arsenals.  Yet paradoxically, the very scope of the catastrophe has acted to shore up support for him, since any particularly hard times -- regardless of who caused them -- tend to inspire people to rally 'round the current leadership.

History will eventually judge him as a terrible president, but I'm afraid the forces of partisanship will, in the short run, try to cast him in the public eye as a second Saint Ron who saved the world.  We can expect this view to be widespread in the media for some time to come.

As of September 2003, I will now risk a prediction for the Presidential election of 2004: barring either some calamity such as a fresh terrorist attack, or widespread vote stealing through rigged Diebold and/or ES&S paperless voting machines, George W. Bush will win fewer states as an incumbent than he did as a challenger.

[post-2004: This prediction was not successful; Bush won one state more in 2004 than in 2000.  It's worth noting, though, that several states had signs of election irregularities, and worse, many used paperless electronic voting... and many of the same states that did so showed a skew in favor of Bush in their official results, relative to exit polls.  States without paperless voting show, as a group, no such skew.  We'll never know whether Bush won those states honestly or not.  Fortunately, since then quite a few states have passed reforms forbidding paperless voting.]