Lord, we thank Thee for the blessings and bounty You have bestowed upon us, and for the gifts You have granted us through the work of Your servant, Doris Wishman.  May her spirit overflow with Thy grace, for the great and generous service she has done in Your name.  Amen.

Oh man, this is the stuff that makes a bad movie hobby so rewarding.  I’d have to call this one of my favorite bad movies of all time.  The finest silly astronaut movie ever made.

Doris Wishman, as some of you know, was a leading maker of “nudie cutie” flicks in the sixties.  The idea is, you set up some thin premise and then you show, like, naked ladies playing volleyball.  They would be given a title something like “the secret world of nudist camps”, so all you really needed for a plot was to have somebody go “There’s a camp of (gasp) nudists, let’s find out what’s really going on in there.”  Nude On The Moon follows that form, but it’s different.  What gives the film its magic is that the “thin premise” part got out of hand.........

They actually try to do a serious story about building a moon rocket!  With a special effects budget of $0.00, and no idea what they’re talking about except from one or two popular-science magazine articles.  (At that time the magazines and sunday papers were overflowing with education and speculation about the solar system and Outer Space.)  In spite of these limitations, they spend fully a third of the film’s running time getting the rocket off the ground, and they’re only a few minutes short of the midpoint when they encounter the first nudism.

They couldn’t build a rocket for us, but one thing they could do, by gum, was make the actors some space suits.  And damn me if these are not the BEST... SPACE SUITS... EVER!  These have got to be truly the goofiest laugh-out-loudiest space suits ever captured on film.  The exposed skin... that hose hanging from the face... the pointy shoulder pads and matching groin guard...!!  And in their overall fashion sense, I almost wonder if these suits helped inspire the design of the Power Rangers.

And then there’s the older protagonist’s silver-smeared hair...!

This is not a review in the sense of criticism; a film of this greatness deserves only praise, not critique or deconstruction.  So, having praised, all that is left to me is to share some of the highlights:

0:00
The opening credits.  They have an original song!  “Moon Doll”.  They sing it along with the credits.  Wait, no they don’t — they sing it before the credits, with no overlap.  And with the screen entirely static.  Gee, do you think the running time of this film might turn out to be kind of padded?
1:42
Here come the actual credits, which include:

“With deep appreciation we
wish to thank the management of
Coral Castle, Homestead, Florida,
for their cooperation in allowing
us to use their facilities”

That song credit gets a whole screen to itself.  Paying a real songwriter and a crooner to perform it probably ate 20% of their shooting budget.  (Ralph Young, as part of the duo Sandler & Young, would go on to fairly major success in television, but if you look at his movie credits, they’re mostly for Doris Wishman movies.  He even has an onscreen role in one of them.)  The producing, directing, and screenwriting credits are all different, but all pseudonyms of Doris Wishman.  Behind these credits we see still pictures of the nude moon people... who, one notices, are not in fact nude.  They’re wearing lamé shorts.

3:30
A dashingly handsome guy who looks kind of like Billy Zane comes out of an office grinning and holding an envelope.  You just know there’s a fat check in it.  He gets into a badass convertible with tailfins...  Hey, why is he wearing a gray jumpsuit?  And... why was he receiving a fat check at, of all places, an airport?
4:17
Billy phones his colleague to tell him there’s good news, and the colleague, addressed as “Professor”, is wearing an identical jumpsuit.  And... what’s up with his hair?  Are those blonde highlights?  No, wait, they’re not yellow, they’re silver... the guy’s got streaks and patches of silver smeared on his head!  That mofo is flocked like a christmas tree!!
5:07
Enter stage right: Ugly Secretary.  Oy!  You have a choice: you may wince, or cringe.  The professor decides to hector Ugly Secretary about having a crush on Billy.  She finally admits it, but wails “He doesn’t know I exist.”
6:45
The words “rocket scientist” are spoken.
8:10
The movie is eleven percent over, and we’ve gotten as far as Billy showing up and telling the Professor what the good news was: a rich uncle died and left all his money to Billy.  (An inheritance hearing — that explains why he was at the airport.)  Professor: “All?  Enough to build a rocket?”  Billy: “Three MILLION dollars!  (After taxes.)”  Plenty enough to go to the moon with.
8:50
Professor brings up the question of whether maybe Billy ever wants to settle down, and maybe let somebody else risk his ass in an untested moon rocket.  “Marriage?  Me?  No sir!”
11:45
Okay, with the funding in place, it’s time to DO SOME SCIENCE!
12:04
13:05
“There’s much we don’t know about the moon....  We know that the character of the moon’s surface is relatively sketchy....  The unbroken rock surface may be EXOLIATED by repeated expansion and contraction!”  He even cites some Mt. Wilson astronomers by name, guys who measured the moon’s surface temperature changes.  What the Professor is trying to say (at great length) is, there might be too much loose rock to safely land and take off again.  But Billy has confidence in his ship.
15:18
15:52
17:43
The rocket is just about ready!  “I’m glad you decided not to notify the press.”  “It’s better we leave quietly.”
18:40
A leisurely drive through Miami to “the field”, with the top down and swinging jazz on the radio... Professor praises a movie that’s up on a marquee: it’s called Hideout In The Sun (in nuderama).  By Guess Who.
21:02         (yes, that was indeed quite a leisurely drive)
“Well, there she is.”  They admire the rocket.  We don’t see it.
21:40
From the inside, the rocket looks remarkably like an old airliner.
21:53
They’re sitting at the controls in their gray jumpsuits (they have yet to wear anything else).  They don’t have any space suits or helmets, but they do have headphones on, and every time they say anything to each other, they pick up a hand mike and speak into that, so that it’ll reach the other via the headphones.  Dude, he’s sitting right there next to you!
22:10
Finally, we see our film’s moon rocket.  Or rather, we see some other film’s moon rocket...  I am disappointed with myself that I have no recognition of where they cribbed that rocket footage from.
22:31
I love how every old astronaut movie has a countdown from ten, but the intervals being counted down are never in seconds.  This one uses units of about 0.6 seconds, which surprises me in that everywhere else, there always about keeping the pace as slow as possible.
22:47
They groan under the brutal acceleration... actually, the Professor looks as if he’s being anally pleasured off camera.  Really — I dare you to view the scene and not immediately think the same thing.
22:51         (four whole seconds later)
Brutal acceleration all finished.  “We’ve made it!”  Detaching nose cone... now why are there two nose cones flying away?
23:42
Goofiest planet Earth EVER.  It appears to be made of play-doh.  But credit must go to the unknown donor film...  We also see the moon: it’s dark green.
24:30
They both fall asleep when it’s time to land!  And, there are whirling meteors!  Nevertheless, the ship lands itself perfectly, on a wasteland of barren dark green rock.
25:12
The moment you’ve all been waiting for, when they open the (airliner) hatch for the Big Reveal.  Not of the moon’s surface — the reveal of the BEST SPACE SUITS EVER. 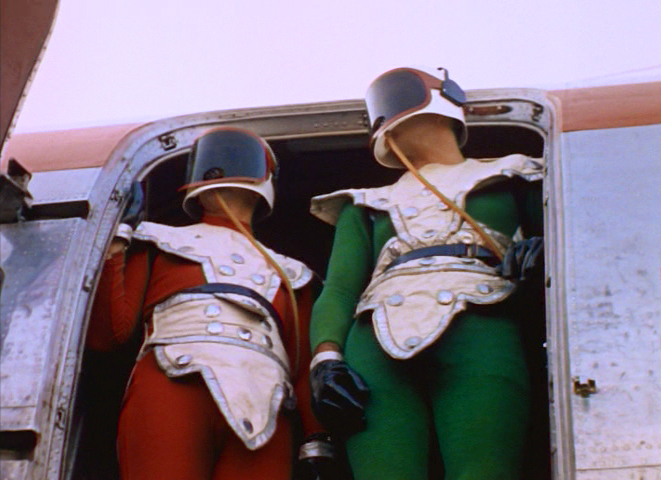 In conclusion: THANK YOU JESUS!

back to Miscellaneous B Movie Reviews

over to Current Events Movie Reviews