Q-Blue is an offline mail reader for use by BBS callers.  It reads mail packets in Blue Wave or QWK format.  BBSing seems to be in decline these days, with everybody flocking to the internet instead, but it still offers value to modem users who are sick of the noise and idiocy and drivel and spam on the internet, especially Usenet.  A private bulletin board run by a hobbyist can support true conversation far better than an international newsgroup can, and you're guaranteed to encounter personalities and points of view that you would never learn about in a typical everyday lifestyle.

Q-Blue is, by most measures, the leader of the pack in BBS mail readers for the Amiga, except for those who want a "database" reader that stores old messages; these users will have to use a program called THOR instead.  Only a minority of users prefer this type of reader, because of the extra complexity and difficulty it necessitates.  The current (and almost certainly final) version of Q-Blue is v2.4, and it requires AmigaDOS 2.04 or newer to run.  And old version that can run under AmigaDOS 1.3 is also available here.

Note:  this copy of Q-Blue 2.4 has been updated on 30 November 1999 to fix a minor scrolling bug, and more recently, a problem has been corrected in the Install script.  This latest tweak also adjusts the license terms and updates the "contact the author" section of the manual.

Click Here to download the complete source code for Q-Blue 2.4 (Zip archive, 307k), or get it from Github.

Some features of Q-Blue 2.4 which set it apart from many other QWK and Blue Wave readers: And v2.4 finally supports file attachment, the one semi-standard feature that earlier versions never managed to include.  Unfortunately, Blue Wave file attachment couldn't really be tested because of lack of door support.

Through most of its history, Q-Blue was shareware with a registration price of $20, and a limit of four replies per upload packet in the unregistered version.  Now, with both BBSing and Amigas falling into comparative disuse, it is freeware, with source available.

Here's a screen shot, showing me selecting a tagline for a reply I'm writing: 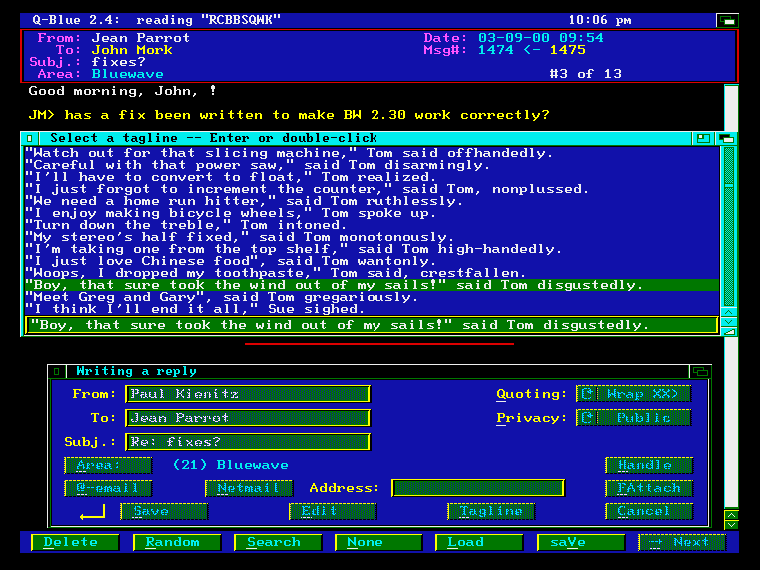 (A minor note: I have found that the name "Q-Blue" was used in a couple of other unrelated areas.  There was a game for the Atari Falcon computer called Q-Blue, with a successor called Q-Blue Plus, there is a jazz band called Q-Blue, and lately there's a small web hosting company called QBlue.  I used the name first.) 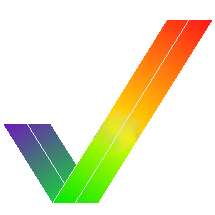