Liar's two CDs at this writing are Devil Dog Road and Gone Too Far.  If you are wondering which one you want to get first, I can't help you much.  Both are great.  I'd say the first one has perhaps got the better songwriting, but the second has the hotter instrumental playing and showcases the violin better.  A brief and subjective description of each song on the two albums is given below.  If anyone has any comments or feedback, please mail me and let me know.

Devil Dog Road was originally album DOG001 from Dog Patch Records, a label which at first seemed to exist largely for this one album, but now offers other nifty outfits such as the indescribable Three Day Stubble.  But later this album was sold by NMX Records, the company that handles the albums of some of Eric's other bands.  NMX has gone out of business, but you can often still find copies on Amazon (here) and suchlike places, or look for it in better local record stores.*

Gone Too Far is album TDP1014 from Toadophile Records, a label probably best known for The Mermen.  We'd all hoped a better-known label would help them reach a larger audience, but it looks like Toadophile has been a dud on that front; for a long time the second album has been less widely available than the first one.  It eventually showed up on cdnow.com, along with some import abums by a Belgian metal band with the same name... which I hope doesn't lead to trouble. 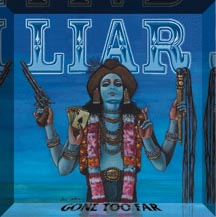 There are now two different versions of Gone Too Far.  After Sheila replaced Marisa, they re-recorded about six of the songs, so that the album would more accurately reflect the current sound.  This makes the original version a collector's item, naturally.  The descriptions below refer to the original version with Marisa, since I haven't heard the new version.  Both versions are, I fear, now hard to find.

Rumor has it that the next release will be a live album, though there are enough new songs to do a third studio album... some of them so great that it's a crime they've gone unrecorded for so long.

* "Better" local record stores are the ones that carry Liar albums.

In the following lists, an arrow (

) marks songs that are particular favorites of mine.  The songs on the first CD, Devil Dog Road, are:

"My Condition"
One of the more chilling alcoholism songs you've ever heard.

"Stranger"
A quiet philosophical musing, with Eric muttering at the bottom of his vocal range.

"Waltz Right Home"
They have a lot of fun with the waltz beat in this one.  One of the few Liar songs to show the weird side of Eric's songwriting, which has been more prominently displayed in other bands.  Seems to be a favorite of some fans in Berkeley.

"Fatetrain"
Marisa sings with a voice bigger than her whole body.  A magnificent arena-sized rocker.

"One Crazy Day"
A fast tempo kick-up-your-heels hootenanny in which Eric makes like a bluegrass banjo picker and Marisa shows off country fiddlin'.  Fun!

"Nevermind"
Another song about pain in a major key, quiet except for the choruses.

"Yours, Not Mine"
A ferocious metal-flavored glimpse into the hell of an addictive relationship.

"Tell Me Lies"
One of their most heartbreaking songs.  A gentle 3/4 melody occasionally erupting with distortion.

"Killing Me"
Marisa sings about boredom and feeling trapped.

"Take You On"
Eric indulges in satirical rage filled he-man posturing in this raucous bluesy/metallic number.  Hilarious and scary.

"14 Years"
A moving ballad by Marisa in which she sings of being abandoned and looks back over wasted years.

"Everything Good"
A slow building rock'n'roll booty-mover which has served them well as a show-closer.

plus a bonus track in which Eric jams with sitarist Wade Baca, with Indian percussion.

The songs on the second CD, Gone Too Far, are:

"Straight To Patti"
Anger!  But not so much anger that they don't take time for some showoff instrumental passages.

"Kill Off The Weak"
A bouncy 6/8 ditty in which Eric rants against all forms of love and compassion.  How seriously to take this song, or any of his songs for that matter, is left as an exercise to the listener.

"Deja Mi Sola"
Their most beautiful song.  Marisa sings in two languages and Eric's guitar playing is at its most purely Spanish.  A gentle melody that builds up to thrilling call-and-response solos between guitar and violin.  Play it for your girlfriend and she'll melt.  The second version of the album has a Marisa-less version with the vocals sung in chorus.

"Everything Good"
A reprise from the first CD; one of two songs re-recorded for the second album.

"Babylon Milkbird"
A marvelous can't-sit-still instrumental with middle-eastern scales and super-infectious rhythms.  Marisa is in her melodic element, the violin outshining the guitar.  Possibly their catchiest number.

"I'm No Good"
A song of bad self-esteem, not without a humorous side.  Fast, hard-rocking, and visceral.  You'll end up singing it to yourself no matter how weird it feels to proclaim that you're no good.

"Night In The Sky"
Marisa sings about somebody leaving her.  A gentle 6/8 number that builds up to considerable intensity. Present only on the original version of the album.

"For Those Who Should Die..."
A fast instrumental with a syncopated beat and a middle-Eastern scale, with Eric playing in his flamenco mode.   Until recently this was the only Liar song with a drum solo, which is a damn shame.  (Unfortunately the version here is not the best; it's overlaid with a conga track that doesn't quite mesh.)  Lots of harmonizing and mutual accompaniment between guitar and violin, as well as back-and-forth soloing.

"One Crazy Day"
The other reprise from the first CD.  In this version, Eric plays a mandolin solo.

"Wanna Be Yo' Man"
Rhythm & Blues with a capital R&B!  A real booty-shaker on the dance floor, and just a very fun song.  The stuttering and hiccuping chorus will cause you to embarrass yourself when you can't help singing it out loud in public.  A crowd favorite for all the right reasons. (Okay okay, technically it's not a blues.)

"The Flight Of Altimeron"
A long, dreamy instrumental saturated with feedback.  Occasionally they open a show with this one, and the warming-up develops into the actual song so gradually that the audience can't tell when it was that the show actually started.  (Altimeron was the name of Paula's cockatiel who one day escaped into the open sky.)

back to my Liar appreciation page

or go to my general (non-Liar) Eric McFadden fan page